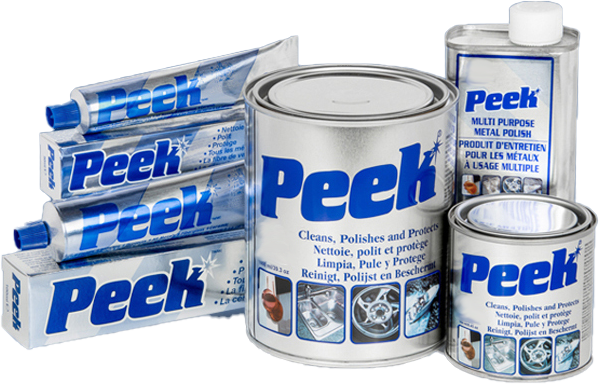 To Purchase Our Products in the United Kingdom or Ireland, Please Click on the Appropriate Button Below:

Learn why users around the world rave about our product

Available in a variety of sizes of paste, plus a liquid option, Peek Polish beautifully does three different jobs:

From aeroplanes, boats, cars and emergency vehicles to housewares, hardware, sporting goods, jewellery, musical instruments and more — Peek can be used on any non-porous surface. It’s a “secret weapon” that’s perfect for everything from industrial applications to home use.

And, our Spray Away Leather Cleaner — available only in the UK — is great for upholstery, carpets, wood, vinyl and more.

What People Are Saying

Our customers are our best salespeople. We’re proud to share some of their comments here and throughout the site.

I was about to replace my gas fire and all the paraphernalia when a friend told me about Peek. This saved me quite a lot of money because it brought my fire surround up like new. This is a top product. I have used Brasso and other products, but none have had the effect of Peek.

We are probably the leading manufacturing silversmiths in the UK. We hold both a Royal Appointment from HM Queen Elizabeth II and ISO9001 and have made silver and gold gifts for most royal households in Europe, the Middle East and the Far East, as well as for several presidents and heads of states around the world. We use Peek Polish and find it the best of all the available polishes.

It’s BRILLIANT! My daughter managed to source and buy a tube — it is incredible! My loo seats were looking less than white, but I knew that they were clean. Problem solved with a quick rub over with your ‘magic’ cream and even the Queen can pop in now if she’s in the area and needs to!

So there is a huge number of Pyrex collectors out there and it turns out Peek is amazing for cleaning up metal marks on damaged pieces. I recently posted this on the Pyrex collectors page on Facebook and the gang went wild. The post already has over 200 likes and everyone wants to know where to get it… Here’s a pic to show how well it worked…. It’s a great product.

It started with a good idea. After launching the first subsidiary of WD40 USA in Canada and exceeding sales forecasts for five years as a regional manager, Robert Peek resigned and relocated to the UK. In 1989, he approached a chemist to ask if he could develop a polish that worked on a chemical reaction and could be used on a multitude of non-porous surfaces—and a year later Peek Polish was launched.

Robert clearly remembers his first sale, made from the back of his car: a one-quart can. His second sale was a carton of cans, his third was 25 cartons —and the company really took off. Robert focused on the UK market and his brother handled North America from his Toronto office.